Why Should You Learn the Basics of
Chinese Love Horoscope?

You may not realize, but learning about the Chinese love horoscope gives you a fascinating topic to discuss with your partner.

Psychologists noted for a long time our tendency to establish lasting relationships with those like us. Relationship compatibility is always a hot topic - it can help you open a conversation with a woman anywhere.

Every woman is familiar with the Western (solar) zodiac, but when it comes with the Chinese one, many haven't even heard of it, but would be thrilled to.

Unlike the Western zodiac version, Chinese astrology doesn't calculate the positions of sun, moon and planets at the time of birth. Your Chinese horoscope shows your prevailing personality and character traits based on your birth day, birth 'season' and birth hour.

Chinese love horoscope may seem complicated if you learned the occidental horoscope system (Aries, Taurus, Gemini, etc.) first, but it's actually not. In fact, it is pretty simple. Each of the 12 signs in the oriental zodiac represents a specific animal depending on your birth year.

Here's the list of the 12 Chinese love horoscope signs with their corresponding birth years and their main characteristics:

They have a very good instinct and prefer to live by their own rules - they make good business people or politicians.

Rats don't do well when it comes to ending relationships, which causes problems when it's time to build new ones.

The Rat can be false, manipulative, selfish and obstinate.

They dislike small talk, and won't waste their time flirting.

These individuals will wait for the perfect partner because change and variety make them uncomfortable.

The Ox can also be demanding, narrow-minded, stubborn even rigid.

Creative, colorful, affectionate and passionate, Tigers are not motivated by money or power and are never boring.

They're unpredictable, daring, expressive and don't mind being challenged, so watch out!

This is an aspect of the Chinese love horoscope that you should really remember.

Their partners need to love adventure and be equally enthusiastic to keep up with the powerful Tiger and be ready to deal with impulsive and rebellious roars, even recklessness.

Gracious, artistic, sensitive, self-assured, sensual and sweet, Rabbits are extremely compassionate and tend to give more of themselves than they have to.

This can lead to unreasonable expectations and unhealthy situations, so they need partners who won't take advantage of their giving disposition.

Rabbits don't like to argue and enjoy quiet, peaceful lives in a beautiful environment, as they are well-known for their good taste and refinement. Sometimes they can become opportunistic, moody, self-indulgent and superficial.

Strong, dignified, self-assured, zealous and fiery, Dragons need tough-skinned partners who can deal with their quick, sometimes over-bearing and occasionally even vindictive temper.

This Chinese love horoscope profile fits people who won't commit easily. Passionate, generous and loyal Dragons are into love, but they won't simply give up their independence for the sake of love.

However, when they find enthusiastic and compelling good-matching partners, they'll generally commit for life.

At their worst, Dragons can be arrogant, hasty, tyrannical, and violent.

The Chinese love horoscope profile of the Snake applies to all you hardy playboys out there who approach well but don't follow through.

Once they've chosen a mate, the Snake's distrustful and insecure side will begin to show through. Snakes guard their chosen partners much like prized possessions, becoming easily jealous and even obsessive.

It's important to remember to never betray a Snake's trust - a betrayed snake will make it a goal to get even someday!

Cheerful, popular, smart, open-minded and magnetic, the Horse has a tendency to fall fast and hard for others.

They tend to give themselves completely in each new relationship - a nature that ends up consuming them. Fortunately, this draining trait softens with age and connections are firmer and steadier later in life.

At their worst, horses can be restless, indecisive, fearful, arrogant and even rude.

Generous, artistic, gentle and shy, Goats tend to be peaceful and private, so it can take a certain amount of effort to get to know one.

The Goat is the one who will decide when and with whom it will share its private life. As a result, the majority of Goats have few close confidantes, yet they'll work hard for those they truly love.

Under stress, Goats can be indecisive, too passive, moody, pessimistic and complaining, so try to not pressure them!

This inclination has to do with the fact that they are readily bored. However, remember this Chinese love horoscope trait: Monkeys will end this type of behavior once they pair up with the perfect partner.

In fact, more often than not, they'll commit to that person for life.

At their worst, Monkeys can be snobbish, suspicious, selfish, sly, deceptive, manipulative, and hollow.

According to the Chinese love horoscope, the Rooster's bossiness and honest "tell it like it is" approach doesn't work well with touchy people.

Roosters have caring hearts overflowing with love, but can be can become self-centered, perfectionists, critical, rigid, even fanatical.

Intelligent, friendly, practical, good-looking and open-minded, Dogs are trustworthy, but trusting others is a big issue.

It can take a long time before the Dog feels at ease with another person.

The Dog has a difficult time building romantic relationships.

Honest, fearless, hard-working, patient and loyal, the Pigs are supportive and giving. They're affectionate and sensual, preferring to stay home rather than to go out.

They are simple and enjoy what they have, especially their home and family. Once they find the right partner, they're typically committed for life.

Sometimes the Pig can be self-indulgent, too laid-back and credulous, being an easy victim.

Can you take some more Chinese love horoscope stuff?

Take a minute now to subscribe to Puzzle Bits, the most revealing, FREE relationship E-zine for men--AND claim your FREE Kama Sutra Ebook that comes as a "Thank You!" gift for taking the time to fill in the form below: 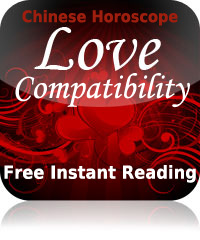