Detailed Chart of Compatibility and Zodiac Signs Below!

You might think all this is nuts man, but stay with me.

If you just get the basics - you'll be able to effortlessly start an interesting conversation on this topic, gaining an aura of a fascinating, well-read guy. Women will flock around you!

Plus, you'll be seen as an expert on how to talk to girls.

You can easily skim the surface of this topic - luckily, media has made astrology and the compatibility of zodiac signs incredibly popular.

No, you don't have to digest everything you find about compatibility and zodiac - that's impossible!

That's why we've synthesized the basics for you and provide here a free zodiac compatibility chart to give you a good start.

Take a minute now to subscribe to Puzzle Bits, the most revealing, FREE relationship E-zine for men--AND claim your FREE Kama Sutra Ebook that comes as a "Thank You!" gift for taking the time to fill in the form below:

The Zodiac System in Western Astrology...

...is known to have been used by the Greeks and Romans, based on concepts inherited from Babylonian astronomy some 2,500 years ago. It's based on the principle of "as above, so below" - or how the modern "holographic theory" was known in the past.

The visual representation of the heavens at the moment of one's birth through a "natal chart" constitutes their horoscope. Horoscopes were widely used - not only in the Western astrology, but also in Vedic and Chinese astrological traditions - as ‘maps' to someone's character tendencies, psychological traits and probable life path.

To put things in perspective, you should know that the correlation between relationship compatibility and zodiac signs was a big area of interest in social dynamics across cultures since ancient times. However, in the past only the rich could afford skilled astrologers and benefit from this advanced knowledge - or the highly educated that were able to understand its complexity.

After a long time of ridicule and disgrace due to speculation and abuse by the ignorant, now the interest in the connection between relationship compatibility and zodiac signs (both Western and Chinese) it's again on the rise.

While in Western and Indian (Jyotish) astrology a horoscope reflects the movement of the sun, moon and planets and their interplaying energies, in Chinese astrology a horoscope is based on cycles of 12 years. You would also have to know the hour of the day you were born at to have an accurate Chinese horoscope love compatibility chart.

But let's start with the Western astrology where the 12 zodiacal signs represent 12 main types of personality categorized by four elements (fire, earth, air and water). These 12 zodiac signs display three types of characteristics (cardinal, fixed and mutable) and either masculine or feminine traits.

...are first and foremost about the typical traits of the 12 signs.

The best way to approach the concept of compatibility and zodiac is through analogies and the interpretation of metaphors. This last bit is essential.

Why? Because you can spend all day memorizing the traits of each sign, but if you cannot interpret the metaphors, you won't be able to figure out what these signs mean.

Without these basics, you could get a headache trying to make sense of more advanced concepts on compatibility of horoscope signs.

Related Topics on this Site:

"We are all a little weird and life's a little weird, and when we find someone whose weirdness is compatible with ours, we join up with them and fall in mutual weirdness and call it love." 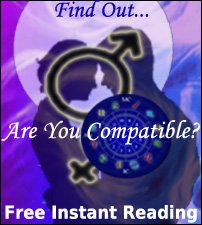