Home > What Do Women Want? > Things Women Dislike in Men

Do You Know the Top 3 Things Women Dislike in Men? If You Want to Succeed with Women Don’t Ignore these Relationship Deal Breakers!

Do you really want to succeed with women? Then, take a look at some of the things women dislike in men - guys they are just starting to date or have an established relationship with. You'll also discover some practical solutions that you might find useful for yourself.

We won’t address now obvious things like playing games, cheating, playing the victim and other relationship offenses that are big NO-NOs for both genders; although these are major relationship deal breakers, since they don’t concern strictly men (women are often guilty of these too), we'll deal with these in a future article. 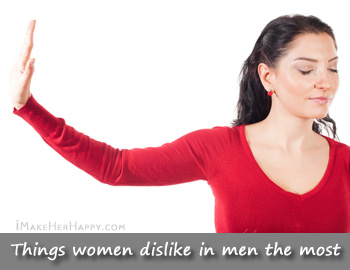 You’ll learn here about some specific things women dislike in men regardless of geo-cultural bias - things that many guys aren’t even aware of.

So take a look below and make sure you stay clear of these behaviors - they turn women off no matter their background, age, education or where they live.

One more thing before we dive in.

Women are very perceptive beings; they figure out who you really are by noticing how you show up in your interactions with them and with the world around you. They can detect very quickly self-confidence, insecurity, friendliness, neediness, solidity, defensiveness, arrogance, phoniness, and so on.

In other words, your outer game (how you show up in the world) reveals to a woman your inner game (who you are, your character and personality) - and that's a decisive factor in making women want you.

When it comes to self-care and grooming, best is neither too much nor too little; a good balance is golden.

For example, it’s great if you have a few useful or relaxing hobbies that benefit your body, your brain and your soul –  to a woman that’s manly; she’ll respect you for that. However, if you put a LOT of energy and time (weekends and several hours each day) into these things, it will likely be one of her dating dealbreakers.

That’s because you appear too self involved, with not enough left for other interests and other people in your life. Scarce availability is irritating to most women – it makes them feel neglected. But think about this: if your girlfriend chose to spend most of her free time doing things on her own, how would you feel?

Here's what to do: no matter how busy you may be, plan to spend quality time with your sweetheart each week - a few hours dedicated to your relationship and to strengthening the connection between the two of you. If you can't meet in person daily, make sure to - at least - connect with each other through phone, email, Skype, SMS - after all, intelligent texting is all it takes to turn even the coldest woman into a passion addict!

Now let's look at grooming - how can too much grooming annoy women, you ask?

Well, when a man wears nail polish, bathes in cologne, waxes his eyebrows, waves his hair on a regular basis, shaves his body or goes totally bare down there it freaks out most women. It makes them feel they’re in a beauty competition - or worse - they wonder what gender their male partner actually wants to appeal to. So if these are things women dislike, let’s see what is acceptable - and, in fact, required if you want to succeed with women.

Here are some basic tips for grooming (the first of the attraction factors). 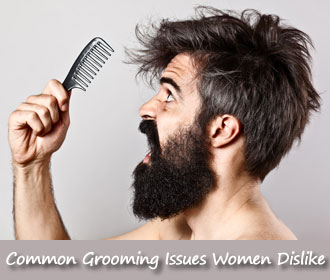 Stand up straight, wear clothes that fit your body, clean sneakers or shoes, tie your shoelaces. Failing at any of these signals sloppiness, which is repelling to women - in fact another one of girls’ dating dealbreakers. That’s because you send the wrong message: you don’t care enough about yourself - when you don’t, you won’t care about her (or others) either.

While stinginess is commonly considered to be about money, it also applies to time, emotional availability, appreciation, and generally to the willingness to assist and support in any way a man could. 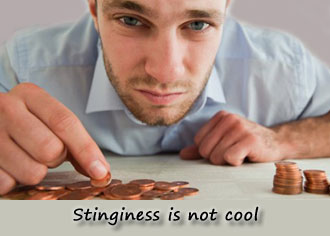 Being stingy (with anyone) is not cool.

After all, sharing is caring - and it goes both ways in a relationship. Plus, generosity is high on the list of character traits women look for in a guy they consider sharing a life with.

Believe it or not, women determine how guys will treat them later in the relationship by their current actions - whether these actions involve money, time, kindness, dedication, thoughtfulness and so on.

When a guy declines to share what he values with his partner, she feels undervalued, diminished and that she can’t rely on his support if need be. She doesn't feel appreciated - and this is not only among the things women dislike in a prospective life partner, but also among their top relationship deal breakers.

If you think that sharing all of yourself with your lady and making an effort to make her part of your whole life is too much, think about this: how would you feel  if she withheld sex, intimacy, thoughtfulness or any other nourishing qualities that you like in a woman so much?

When you look at it this way, you may be able to see that counting pennies can’t be justified in a loving long dating relationship - it will never make women want you.

Here's what to do - if you want to succeed with women who are ready to give you all of their love, physical intimacy, respect, loyalty, encouragement, appreciation: show gracious generosity with the things you can share with her (gradually, as your relationship progresses). You will be surprised in a positive way.

A misogynistic attitude is the mindset defined as “hatred, dislike, or mistrust of females, as well as entrenched prejudices against women in general”.

It’s not hard to see why a woman finds such an attitude repulsive and why she feels deeply offended by it. 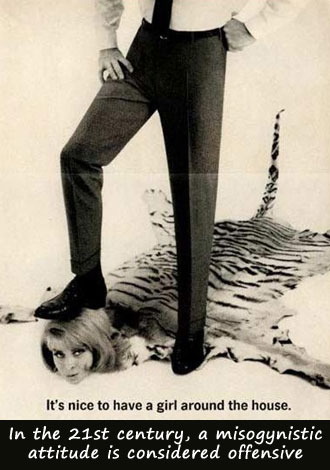 She will run away from a guy who shows even the smallest contempt for females in general or who refers to them in derogatory terms – both HUGE dating dealbreakers. (Not only will she run away, she’ll expose him to all her female friends so they'll steer away from him as well.)

No matter how much a woman may like the guy in other areas, she will think that sooner or later he’ll turn that attitude on to her, which makes her feel utterly insecure with him.

Less and less socially accepted, misogyny is still present in many places around the world. But recent social studies show that behaving based on the premise that women are weak, irrational and unreliable makes not only men with this mindset miserable; it actually makes all men’s life MUCH harder, because it leads to the proliferation of male marginalization and disposability in the workplace and elsewhere in the society.

Here we’re not discussing whether such an attitude is justified or not, since it is irrelevant to the focus of this site (as is looking at who might be profiting from keeping men and women perpetually at war). The point here is that a misogynistic attitude is one of the major things women dislike very strongly in men, killing instantly any attraction.

If in the past this attitude was something women had to accept, times have changed - today women have many more options.

Here's what to do if you want to succeed with women but harbor contempt towards them: adopt a more useful mindset - this will give you a clear advantage over the other men out there struggling with a misogynistic conditioning. You may want to take a look at Jack Holland’s Misogyny: The World's Oldest Prejudice  - it's an amazingly well-researched book that will give you an interesting perspective.

Want an additional advantage over the other guys? Then get a little-known insight into the female mind by discovering how women think.

Finally, we need to address a completely different type of issue that is the next on the list of things women dislike strongly in men >>

To get free updates & more tips like these, join our community:

Take a minute now to subscribe to Puzzle Bits, the most revealing, FREE relationship E-zine for men--AND claim your FREE Report that comes as a "Thank You!" gift for taking the time to fill in the form below:

Home > What Do Women Want? > Things Women Dislike in Men

What Do Women Want?

The Formula of How Women Think

Find Out What Women Want in Men

Discover What Women Want from Men

2 Types of Guys that Women Dislike

Understanding Women Is Easy If...

What Women Want to Hear--cheatsheet

Know What Women Want in Bed?

How to Make Women Want You

How to Succeed with Women: 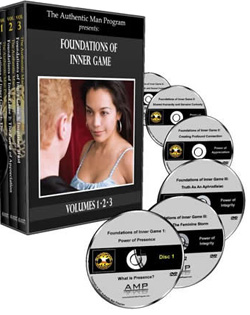 "I’ve put tons of money into all the popular “pickup” products like Mystery, etc. I’ve gone through them over and over and I’ve just never got the connection that I’m getting with women now... ever. I simply wanted most to have a woman be attracted to me and love me for me, without having to change anything about who I am. The fact that you guys have discovered the code to that is totally revolutionary to me. Everything that a guy says he wants, I feel like I’ve got that now... It turns me into this rare gem that women just aren’t expecting and it disarms them because I’m being honest and real."