Home > What Do Women Want > What Women Dislike

Why Women Dislike Baby-Men & Tough Guys: Little-Known Relationship & Dating Dealbreakers
(Or, how to not have women breaking up with you out of the blue)

We’ve already talked about the top 3 things women dislike in men so much that they’re definite relationship and dating dealbreakers. Now, you need to know about one more issue many men struggle with (no matter their age) - a serious issue which annoys some women and amuses others. No matter how girls react to it, sexual attraction is NOT it. 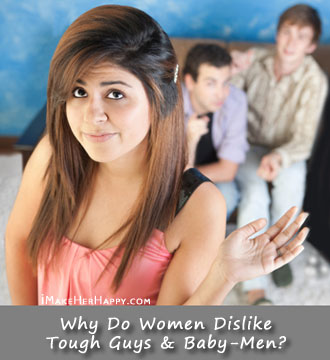 Don't scoff - can you recall hearing frustrated or outraged women saying “Just grow up!” to a guy? That's a biggie for all girls!

She must have felt that he’s behaved in an immature way – either like a “baby-man” or a “tough guy”, two opposite expressions of emotional immaturity that many men aren’t aware of.

How maddening is this??

When guys who want to succeed with women keep failing - despite applying the best dating and seduction tips they’ve learned - they wonder what’s going on.

Is this you too?

Have you ever happened to date a wonderful girl thinking that everything is great between the two of you and then suddenly she dumps you - seemingly out of the blue? Without giving you any reason? Or another chance? Well, that's probably because she felt you're an immature guy not worth to waste her time with.

It helps you to know that - in contrast to being a tough guy (often referred to as macho jerk), which is apparent from the beginning of a relationship - behaving like a baby-man is rarely among the dating mistakes men make at first. This often surfaces as the relationship evolves and he’s more relaxed, less watchful of how he comes across: indecisive, needy, clingy, overly emotional, even co-dependent or Mr. Nice Guy.

Let’s give you a new perspective into these two behaviors women dislike in men to make sure you don't fall into the sea of guys dumped without a second chance. Without it, you won’t be able to make women want you around for too long, no matter how incredibly attractive you may be in other areas of your life.

Complaining: When things go wrong in life (as they sometimes do), instead of complaining or sulking about it why not choose to use this situation as an opportunity to learn, change and grow beyond your current comfort zone? Your complaints may be fully justified; but justified or not, when you’re complaining, you're invariably focusing on what you don’t like and - as a result - you end up creating more of the same.

No wonder this isn't working for you; try this instead.

Whenever you catch yourself complaining about something you are not able (or willing) to change, make a conscious decision to just stop whining about it. Because whether you like it or not, constantly complaining about this and that is the opposite of women’s favorite Alpha Male dating behavior. 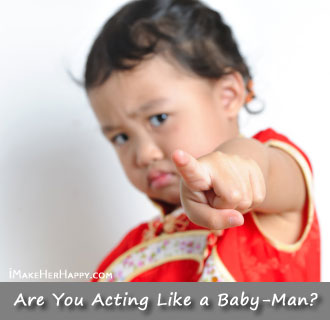 Laying Blame: You know that living means making choices and every choice you make has consequences, which you are responsible for. Blaming others (even when others are to blame) often shows a lack of personal responsibility – at least that’s how women think about it.

Plus, constantly blaming others signals that you view yourself as a victim – since you think that others (or external circumstances) are causing your hardships. This way, you inevitably focus on the negative. You inevitably experience anger and resentment - sure ways to cause additional stress, even depression. Do you think others enjoy being around someone like this?

No wonder women dislike this trait in a man; that is definitely not what women want to hear from their partner.

Here's what to do instead: when you catch yourself blaming someone or something outside of yourself, stop and redirect your focus on what you CAN do about it or on any necessary damage control – doing what YOU can puts you back in the driver's seat immediately.

Justifications & Excuses: Did you know that giving justifications or making excuses for what you have or haven’t done is perceived by others as failing to take responsibility for whatever it is that went wrong? That's adding offense to the injury. If you want to succeed with women (and everywhere else in life), taking responsibility for whatever is happening in your reality is not only the adult thing to do; it's the right thing to do.

You may not realize, but responsibility is not only a valuable strength high on women’s list of character traits they want in a man; when you become responsible, your attractiveness skyrockets - everybody starts to appreciate and respect you for it in ways you never imagined.

Needing to Be Right: Be completely honest - do you really think you are never wrong? Believe it or not, insisting to prove you’re right is a sign of deep-rooted insecurity, which women dislike a lot.

But needing to be right is nothing more than our reptilian brain's defense mechanism set up at an early age when we learned to make sense of the world, but which often backfires in adult life. That’s because when we refuse to see our own errors, we miss the best opportunity to change the very aspect(s) of ourselves that might keep us stuck or unable to succeed – with women or otherwise in life.

You're getting the point, aren't you?

Crying: Unless something really tragic has happened, when you cry in front of a woman your manly image is gone. You can’t make women want you if you cry at the slightest hurt.

Just think about it.

She wants to be with a guy who’s strong, emotionally stable and has the capacity to protect her; yes, she wants a sensitive man in touch with his emotions, but this doesn’t mean crying for each and every ache and pain. If you need to do some emotional cleansing and feel like crying, that’s nothing wrong with it; just do it by yourself, not in front of a girl.

Complaining, blaming others, giving justifications, insisting we are right, crying when we can’t get something we want are things that - as children - we all have done. For example, parents were asking, "What’s wrong?" wanting to hear what’s bothering us, so they can make it right. Or, we may have given justifications or blamed a brother or  playmate to bail ourselves out. We learned to express frustration and helplessness by crying, so an older caretaker would come and pacify us.

However, as adults, these are simply unacceptable; women dislike these (often unconscious) immature behaviors in a man a lot.

Once you've cleared these blocks to succeeding with women, you can also see...

No matter what you’ve been told, being cocky is not cool; in fact, arrogance is a total turnoff for women. 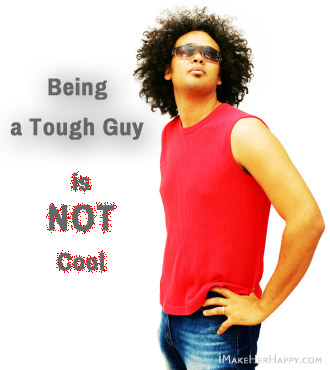 Being perceived as a condescending macho jerk with a BIG ego is one of any girl’s dating dealbreakers.

If you want to make women want you consider this.

Being rude to anyone you think is beneath you is as offensive to a woman as being rude to her – this is one of the less obvious dating mistakes men make quite often. You might be really nice to your girl on a date; but don’t forget - she'll be paying attention to how you act with other people too.

Well, if you’ve had a chance to discover the three things women dislike in men, you know that women look at your outer game (i.e. how you behave and treat other people) to assess your inner game (i.e. your personality and character).

So if you really want to succeed with women remember this.

You may be intelligent, capable and really hot – and know it; but in most women's eyes this doesn’t give you a permission slip to be a smart ass about it.

When you are good at something, let women discover it on their own. Arrogance is repulsive to most women – in fact, no one appreciates someone who’s always talking about himself and his successes.

While self-confidence is a good thing, being cocky or arrogant is not; don’t make the mistake of confusing the two, or it will hold you back big time from being successful with women.

Finally, here are some questions you may want to consider:

The only failproof training available for making such a shift - from the inside-out - and building a solid foundation (in just a matter of days) is AMP’s Foundations of Inner Game.

Until recently, this uncensored program used to be available only as s a weekend-long training in the San Francisco area. But with so many guys all over the world wanting to get it in a more practical (and much more affordable) format, the AMP guys and incredibly sexy gals made it available in a convenient multimedia format as well:

To get free updates & more tips like these, join our community:

Take a minute now to subscribe to Puzzle Bits, the most revealing, FREE relationship E-zine for men--AND claim your FREE Report that comes as a "Thank You!" gift for taking the time to fill in the form below:

Home > What Do Women Want > What Women Dislike

^ Top of What Women Dislike

What Do Women Want?

The Formula of How Women Think

Find Out What Women Want in Men

Discover What Women Want from Men

2 Types of Guys that Women Dislike

Understanding Women Is Easy If...

What Women Want to Hear--cheatsheet

Know What Women Want in Bed?

How to Make Women Want You

"When I meet men after AMP they're more attractive because they are more in touch with their masculinity and that instantly makes them more sexy."